Jesus met with His disciples one last time before His death.  Together they shared the traditional Jewish Passover meal, Jesus’s Last Supper.  During this meal, Jesus revealed troubling news:

“Verily, verily, I say unto you, that one of you shall betray me…Then the disciples looked one on another, doubting of whom he spake…Jesus answered, He it is, to whom I shall give a sop, when I have dipped it. And when he had dipped the sop, he gave it to Judas Iscariot, the son of Simon.” (John 13:21-22, 26)

“Then…Judas Iscariot, went unto the chief priests, And said unto them, What will ye give me, and I will deliver him unto you? And they covenanted with him for thirty pieces of silver. And from that time [Judas Iscariot] sought opportunity to betray [Jesus].” (Matthew 26:14-16)

But events unfolded far different than Judas’ had expected or intended.

“When the morning was come, all the chief priests and elders of the people took counsel against Jesus to put him to death…Then Judas…when he saw that he was condemned, repented himself, and brought again the thirty pieces of silver to the chief priests and elders, Saying, I have sinned in that I have betrayed the innocent blood…And he cast down the pieces of silver in the temple, and departed, and went and hanged himself.” (Matthew 27:1-5)

What is the meaning of the thirty pieces of silver?

Thirty Pieces of Silver as a Tithing

Some Bible readers have suggested that Judas’s betrayal of Jesus was as a tithing of the expensive ointment used to by Mary to anoint Jesus:

“Then took Mary a pound of ointment of spikenard, very costly, and anointed the feet of Jesus, and wiped his feet with her hair: and the house was filled with the odour of the ointment. Then saith one of his disciples, Judas Iscariot, Simon’s son, which should betray him, Why was not this ointment sold for three hundred pence, and given to the poor? This he said, not that he cared for the poor; but because he was a thief, and had the bag, and bare what was put therein.” (John 12:3-6)

In this interpretation, Jesus is worthy only a small percentage of the cost of the ointment, that fraction being a trifling amount.  Judas did not think Jesus was so valuable.

Thirty Pieces of Silver as the Price of a Slave

If we turn to the Law of Moses (Exodus 21:32), we learn that if an animal gores a slave to death, the animal’s owner must pay thirty shekels for the loss of the slave.  The slave is valued at thirty shekels.

From this perspective, Jesus is priced as a slave.  His death is the value of the death of a slave. 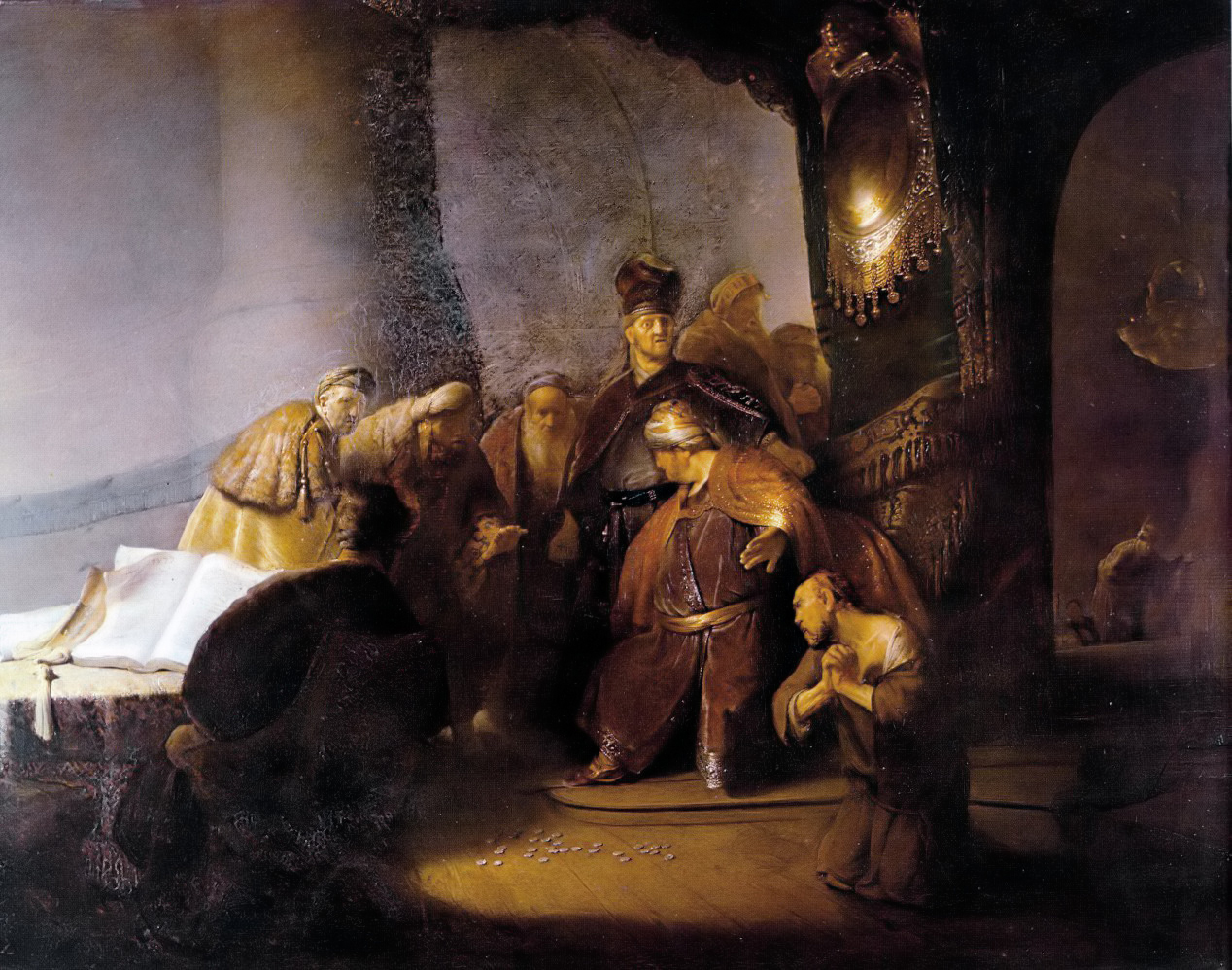 Twenty Pieces of Silver: Joseph Being Sold as a Slave into Egypt as Prefiguration of Jesus

Others have seen the story of Joseph as a symbol or prefiguration of Jesus Christ.  Genesis 37 describes Joseph, son of Jacob, as the favored son who dreams and interprets dreams.  Joseph’s older brothers are jealous that their father lavishes attention on the youngest son.  They are irritated that Joseph interprets dreams in his own favor, describing the brothers as bowing in servitude to Joseph.  The elder brothers conspire to kill Joseph, but later Judah convinces them to sell Joseph as a slave.

“Come, and let us sell him to the Ishmeelites, and let not our hand be upon him; for he is our brother and our flesh. And his brethren were content. Then there passed by Midianites merchantmen; and they drew and lifted up Joseph out of the pit, and sold Joseph to the Ishmeelites for twenty pieces of silver: and they brought Joseph into Egypt.” (Genesis 37:28-29)

Though the exact sale price is different between Joseph and Jesus (twenty shekels vs thirty shekels), many have imagined that inflation would make the twenty pieces of silver in Joseph’s time equal to the thirty shekels in Jesus’s time.

Thirty Pieces of Silver as a Trifling, Meaningless Amount

All of these above insights are compelling and informative.  But the insight I find most compelling comes from the ancient Sumerian culture.

The Sumerians had a flourishing culture from about 4000 BC – 2000 BC in ancient southern Mesopotamia (southern Iraq).  Over the years archaeologists have discovered and translated hundreds of thousands of Sumerian tablets, which record their stories, songs, and sayings.

What has been discovered?  Whenever an ancient Sumerian wanted to express the idea that something was worthless, they would say “It is considered a mere thirty shekels worth.”

Since thirty shekels of silver was actually a considerable sum of money during the Sumerian culture, this seems like a strange and contradictory way to describe something as worthless.  Why did the Sumerians come up with this statement in the first place, to describe worthless and valueless objects?

In the Sumerian culture, sixty (60) was their foundational, base number, much like ten (10) is in our culture today.  They used base-60 for measuring time (still with us today in the concepts of a 24-hour day, 60 minutes in an hour, and 60 seconds in a minute) and geometric units (360 degree circle).

In the minds of the Sumerians, sixty was complete, full, useful, productive, necessary, the basis for measuring and valuing all things.

Thirty is half of sixty.

Therefore, thirty is incomplete, not full, not useful, not productive, not necessary, and useless for measuring and valuing things.

Hence, “thirty shekels of silver” means a trivially useless amount of no value.

Anciently, this saying “thirty shekels of silver” became a popular proverbial statement.  And as the years rolled on, this phrase entered wider use among other cultures in the ancient Middle East, including ancient Israel.

Though these cultures modified the use of meaning of “thirty shekels of silver” the phrase continued to retain, at its core, the meaning of useless, low value, trifling, incomplete, worthless.

How do we value Jesus?

What does the thirty shekels of silver mean about Jesus?

His life had no apparent value to those who rejected him.  The inimitable prophet Isaiah expressed this feeling well in Isaiah 53.

Yet what a contrast when we realize that He who lost everything, gained all and then turned to give us everything.

He who was deemed a trifle, a slave, incomplete, worthless, of no value won for Himself and for us everything, the value of eternal life in the presence of God.