For starters, we have in King Noah failed covenantal kingship. God revealed in the law of Moses what He expects from covenantal leaders in Deuteronomy 17:14-20. I interpret these passages as a set of God decreed kingly dos and don’ts.  I’ll begin with the don’ts:

What should the king being doing with all of his time and influence?

(See more on this topic in my article “Deuteronomy 17:14-20 As Criteria for Book of Mormon Kingship“.)

Noah Was a Loser and a Failure on All Counts

Abinadi also came to these errant Nephites to remind them of the covenantal instructions revealed to the children of Israel at Mount Sinai through Moses. What is significant is that King Noah abrogated his duties to preserve, read, and teach the law of Moses (the covenantal instructions). He instead placed that duty at the feet of his priests, who then tried to trap Abinadi by requiring him to interpret a passage of Isaiah 52:7-10.

How Beautiful Are God’s Servants

The theme of that Isaianic passage is that prophets speak of happiness and peace, not doom and gloom. Abinadi prophetically and appropriately corrected the priests understanding of this passage. Isaiah was not simply creating a rubric whereby we are to judge true prophets from false. That was exactly what the priests of Noah were trying to claim, that Isaiah must surely be a false prophet since he was preaching death and destruction, not glad tidings of peace.

Isaiah showed them, by later quoting from Isaiah 53, that the real meaning of Isaiah 52:7-10 is that those who preach of the salvation found in Jesus Christ—how beautiful upon the mountains are their feet. Abinadi fulfilled that very theme in Isaiah by preaching of Jesus Christ to King Noah’s court in Mosiah 13-16. In fact, it was Abinadi’s preaching of the condescension of Jesus Christ form heaven to bring us salvation, that Noah and his priests found Abinadi “worth” of death.

Significantly (though this is not from the assigned reading of this week’s Come Follow Me curriculum), the one other place in the Book of Mormon where Isaiah 52:7 is quoted is when Jesus Himself has His feet firmly planted in the new world among the Nephites teaching them of His works of salvation on their behalf (3 Nephi 20:40). Jesus is the fulfilment of “How beautiful upon the mountains are the feet of him that bringeth good tidings.” This was the core of Abinadi’s message.

In addition to preaching directly about Jesus Christ, Abinadi further reinforced the covenantal instructions God has established for His people at Sinai. The Ten Commandments represent the core of God’s covenantal expectations of His people. Notice that Abinadi queried the priests if they were instructing on these laws. They claimed they were, but obviously they were not living the law of the covenant path “If ye teach the law of Moses way do ye not keep it?” (Mosiah 12:29). And further, Abinadi said, “I know if ye keep the commandments of God ye shall be saved; yea, if ye keep the commandments which the Lord delivered unto Moses in the mount of Sinai” (Mosiah 12:33). 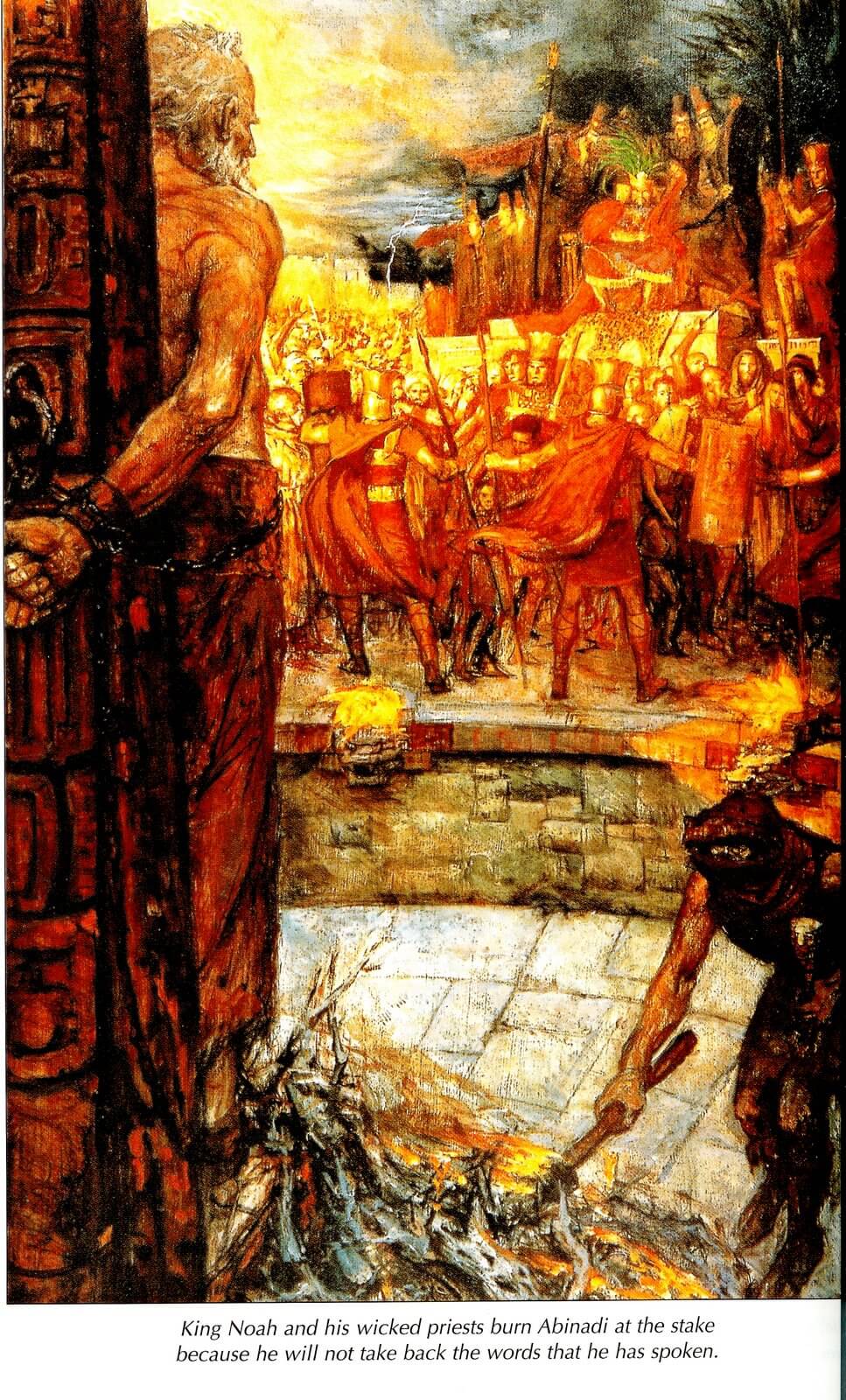 Abinadi then reinforced their covenantal responsibilities by reiterating the covenantal stipulations first revealed to Moses—the Ten Commandments. The priests knew that they had entirely broken God’s covenants, had stepped far off the covenant path, and were leading the people off the covenant path. They were so angry at being told the truth, they sought to kill Abinadi right then and there.

And it what is literary and divine beauty and justice Abinadi commanded them not to touch him. “The people of king Noah durst not lay their hands on him, for the Spirit of the Lord was upon him; and his face shone with exceeding luster, even as Moses’ did while in the mount of Sinai, while speaking the Lord” (Mosiah 13:5). The very prophet these priests claimed to revere was now visually and symbolically before them as they heard the very words Moses revealed, as Abinadi continued to recite the Ten Commandments.

Abinadi’s message condemned the King Noah and his priests to the very same fate that they unrighteously meted out again Abinadi—death.

The Power of One Individual

Abinadi was one man. His message sunk deep into the heart of one man, Alma, who repented and started a religious movement. Because of these two witnesses, we have the Book of Mormon today. Without Abinadi, there would be no Alma the Elder, no Alma the Younger and quite possible no church in Book of Mormon times and no Book of Mormon in our times.

One man stood for living and teaching the covenant path. That man was Abinadi. A solitary servant of the Lord to be praised throughout the ages.

And check out my new book Hear Him: Listening to the Voice of God in Scriptures and in Our Lives by Taylor Halverson, Lisa Halverson, and Tyler Griffin.